In late 2017, emails were leaked detailing the planned end for Friendship is Magic and the beginning stages of G5 planning. Concepts focused on redesigns of Twilight Sparkle, Rarity, Applejack, Pinkie Pie, Fluttershy, and Rainbow Dash. 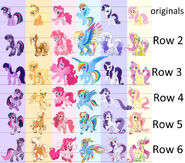 Add a photo to this gallery

In October 2020, an anonymous 4Chan user claimed to have seen a screening of the unfinished Movie.[1] The user gave a few hints as to what was shown. The summary included points such as the movie taking place in Equestria after the cast of the Generation 4 show have all died, different types of Ponies living in segregated areas, and a main character who is a Pegasus with a broken wing.

A November thread from a different user also claimed to have seen a screening, and mentioned very similar points to the previous thread.[2]

Although both threads were presumed to be false, details released concerning the movie later on seem to give merit to these claims.
THIS WILL LIKELY BE REMOVED UNLESS FURTHER REVEALS MIRROR WHAT WAS SHOWN

In January 2021, a Taobao retailer uploaded some Generation 4.5 figures with a new logo and background that had not been seen thus far.[3]

There is currently speculation as to whether this could be the official logo for Generation 5.

On January 12th, 2021, an anonymous user on 4Chan claimed to have worked on the movie and identified the characters featured in the Logo Leak's image. They claimed that the ponies were named Pipp, Zipp, Izzy, Sunny, and Hitch.[4]

On January 13th, 2021, an upload on Slideshare was discovered to feature the Mane 6 from Generation 4. The original uploader for the storyboard, Marylene Sun, has on her LinkedIn that she had worked at Boulder Media on an "Upcoming CGI Movie" from July of 2018 through February of 2019[5].

The animatic is titled "Opening Scene Song". It has since been removed from Slideshare, but has been uploaded in other places of the internet since.[6]

On February 22nd, 2021, JerryFabrics uploaded an image of licensed bedspreads which feature Sunny Starscout, Izzy Moonbow, and Pipp Petals. The text "everypony can make a difference" in a style similar to the leaked logo can be seen on the top of the duvet. The bedsheets have a release date of 9/2021, which matches up with the projected release dates of other merchandise [7]. Two days after this was found, EntertainmentTonight posted the first screenshot of the Movie, showing that the bedspread is indeed real merchandise.

Retrieved from "https://g5mlp.fandom.com/wiki/Leaks?oldid=824"
Community content is available under CC-BY-SA unless otherwise noted.